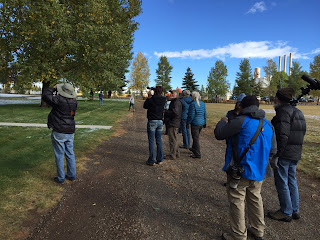 Doug Eddy led a great trip to several birding hotspots around Laramie this past Saturday, September 24. Despite a light accumulation of snow overnight and chilly morning temperatures, we had a great crowd!

Doug started us off at a birding spot new to me, City Springs on the east side of town adjacent to the plains. Highlights included an Empidonax species, either Dusky or Hammond's, and nice looks at a Green-tailed Towhee and White-crowned Sparrows. See our complete checklist here.

Next stop was Greenhill Cemetery, where a flock of a couple hundred blackbirds dominated the birdlife. These were a mix of Brewer's Blackbirds, Common Grackles, and Red-winged Blackbirds. We found Orange-crowned, Wilson's, Townsend's, and Yellow-rumped warblers, and had a great look at a Cooper's Hawk. Our full checklist is here. 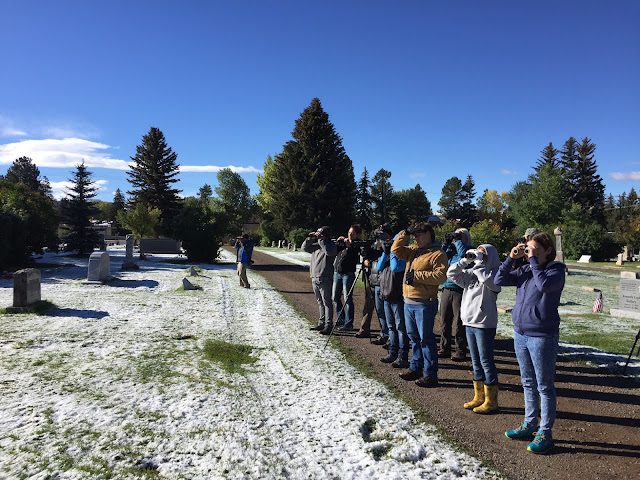 At LaBonte Park, there were quite a few waterfowl on the lake but the highlight was a Merlin. Full checklist is here. Doug finished up the hotspots tour with a stop at the Greenbelt; the birds weren't as plentiful at that location, but we were treated to a great look at a Belted Kingfisher.

Thanks all for joining us! We hope you come again. If anyone who was present would like to have the eBird checklists shared with them, just shoot me an email.
Posted by Libby Megna at 4:07 PM No comments: 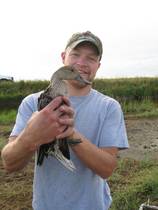 On Wednesday, September 28, Nate Huck will give a talk entitled Duck diets: what they eat and why it matters. As usual, we will meet in the Berry Center; bird chat with refreshments will start at 6:30 pm, and the talk will begin at 7:00 pm.

Nate is the Migratory Game Bird Biologist for Wyoming Game and Fish. He’ll be talking about research from his graduate work at Texas A&M, studying diet composition of Northern Pintails along the Texas coast. He’ll discuss the importance of understanding winter foraging habits for key waterfowl species, and share with us some cool insights from his research. Please join us for his talk!

Posted by Libby Megna at 9:57 AM No comments:

Doug Eddy will lead us on a journey through the best birding spots within Laramie this Saturday, 24 September. We'll look for migrating songbirds, especially warblers and sparrows.

We will meet at 8 am at Night Heron Books & Coffeehouse to carpool. Bring binoculars and field guides, dress for the weather, and bring water and snacks.

Doug plans to visit four spots in town--so if you can't meet up at 8 am we hope you will join us for part of the time! We'll spend about 1 hour at each stop; click on the links below for details and a map of the location.

After the birding is done, we will spend some time cleaning up the section of the Greenbelt that Laramie Audubon recently adopted. We'd really appreciate it if you stuck around after birding pick up trash!

Birders of all levels are welcome! This is a particularly good trip for beginning birders. Our trips are free and open to the public.

Yesterday, Saturday 17 September, Tim Banks and Vicki Henry led a great trip to Hutton Lake NWR. We had nice looks at Greater Yellowlegs, Ferruginous Hawks, and a small flock of Yellow-rumped Warblers, Wilson's Warblers, and Blue-gray Gnatcatchers working through the greasewood. The vast majority of the waterfowl were American Coots and Eared Grebes.

You can view our full checklist here.

In addition to birding, we cleaned out and performed maintenance on the Tree Swallow nest boxes at the refuge. This past summer almost all of the boxes hosted Tree Swallows, and 13 nests apparently fledged young.

Posted by Libby Megna at 2:19 PM No comments: 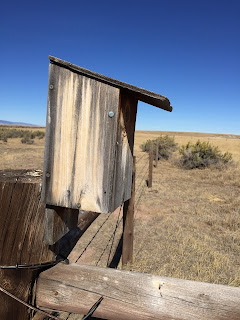 This Saturday, 17 September, Vicki Henry and Tim Banks will lead us to Hutton Lake NWR for birding and nest box maintenance! This time of year the refuge hosts migrating waterfowl, coots, grebes, and hopefully some lingering shorebirds. If you can stay for a bit after birding, we will also clean out and perform maintenance on the tree swallow nest boxes we have on the refuge. Feel free to join us for either or both activities.

Meet at Night Heron Books & Coffeehouse at 8 am. We should be back to Laramie by noon or so, but of course you can leave early if you drive your own vehicle or arrange with carpool buddies. Bring binoculars, a spotting scope if you have one, snacks/drinks and dress for the weather.

Our trips are free and open to the public. This trip is great for birders of all skill levels.

Posted by Libby Megna at 4:04 PM No comments:

Eight Auduboners met extra early to bird the Wyoming Hereford Ranch in Cheyenne this past Saturday, 10 September 2016. Despite the overnight below-freezing temps in Laramie, we lucked into a very nice day at Hereford.

Our hopes for rare fall migrants were dashed, but we did get nice looks at expected species. Although Wilson's Warblers dominated all of the riparian areas at the Ranch, we did pick out one Yellow Warbler and one Townsend's Warbler. We also found a Brown Thrasher, Say's Phoebes, Blue-gray Gnatcatchers, and Warbling Vireos. Our full trip list is here.

We will head out to Hereford Ranch in Cheyenne this Saturday, 10 September, for our first field trip of the season. This is a great place to see eastern species that are migrating through the region, in addition to more expected regional migrants. The ranch has riparian habitats that attract a lot of migrants during spring and fall.

Meet at 7:00 am (earlier than usual) at Night Heron Books & Coffeehouse to carpool and caffeinate to Cheyenne. We will leave no later than 7:15. Be sure to gas up ahead of time--it will take about 50 minutes to get to the ranch. We should get back to Laramie between noon and 1 pm; of course, you can leave anytime you like if you drive your own vehicle.

Bring binoculars, snacks, water, and layer your clothes for weather. This field trip is open to the public and birders of all levels are welcome. Hope to see you this weekend!

Posted by Libby Megna at 8:04 AM No comments: