Hello readers of the Laramie Audubon Society blog! We (Cody and Doug) are going to begin a weekly report of the birds we see in and around town. You can let us know what birds are around your neck of the woods, too, by leaving a comment below our post!

Last week, we made a concerted effort to break the doldrums of winter and try to see what birds were hiding in Laramie. During daily bird walks on the University of Wyoming campus we were rewarded with a Swamp Sparrow (Melospiza georgiana), presumably the same one found earlier in the winter by Don Jones and still hanging around the Agriculture building. Other noteworthy birds on campus were a flock of Cedar Waxwing (Bombycilla cedrorum) and singing Pine Siskin (Pinus spinus) and Townsend’s Solitaire (Myadestes townsendi). One of Doug's favorite birds, Dark-eyed Junco (Junco hyemalis) also showed up this week. You can keep track of what birds are on campus by checking the eBird hotspot for the University of Wyoming.

Moving off campus, we lucked into a flock of Great-tailed Grackle (Quiscalus mexicanus) in West Laramie near the Laramie River. While picking through the flock, Cody noticed a smaller bird that turned out to be a vagrant Rusty Blackbird (Euphagus carolinus)! We were pretty excited to see an unexpected bird, let alone a species that is almost never seen in southeast Wyoming.

Also in the fields west and north of town we found many wandering mixed flocks of Horned Lark (Eremophila alpestris) and Lapland Longspur (Calcarius lapponicus). We didn't manage to find any Snow Buntings in those flocks, but they have been heard flying over town. Mountain Bluebird (Sialia currucoides) has returned to the Laramie Basin and you can also find plenty of predatory birds on the plains like Rough-legged Hawk (Buteo lagopus), Golden Eagle (Aquila chrysaetos), and Northern Shrike (Lanius excubitor).

Lastly, we wanted to report that some of the plains lakes have open water. Blake's Pond and Lake Hattie both had open water where we found Redhead (Aythya americana), Ring-necked Duck (Aythya collaris), and Mallard (Anas platyrynchos).

There's a lot of winter ahead, but if you look hard enough you just might find something on the wind-swept plains of Laramie!

Good birding,
Cody and Doug
Posted by douglitas at 5:16 PM No comments:

Lisa Cox and Brian Waitkus will lead us on a cafe-hopping, bird-finding adventure this Saturday, March 4. We will visit Albany and Centennial, enjoy hot chocolate and relaxing feeder-watching, and look for rosy-finches, evening grosbeaks, and other montane specialties.

Meet at Coal Creek at 8 am to carpool. If you can only join us for a short time, feel free to drive your own vehicle or arrange with carpool buddies. Bring binoculars and dress for the weather.

Posted by Libby Megna at 8:00 AM No comments:

Yesterday morning 27 participants went for a beautiful hike to the Brooklyn Lake area in the Snowy Range. The excellent cone crop of Engelmann Spruce in the area this year is supporting a large number of winter seed-eating birds compared to most years. In a couple hours, we managed to find the following species: 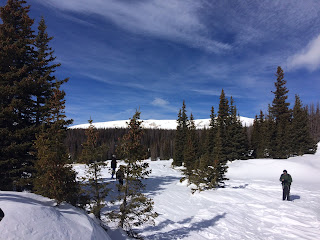 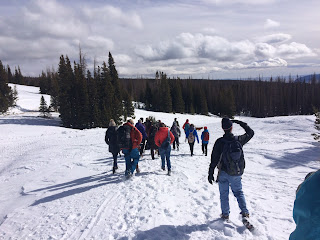 One group also observed a Rough-legged Hawk and a Golden Eagle on the drive back to Laramie.

A small contingent also went out looking for owls yesterday night. While no owls were heard or seen, the group was treated to stunning views of the Milky Way and a handful of bright meteors. The only animal activity detected was a Red Fox feeding on a fresh Mule Deer carcass along the road near Centennial.

Change of location for this weekend's field trip

Given the lack of birds along Vedauwoo Rd. in the Laramie Range, and the abundance of birds in the Snowy Range this winter, we have decided to visit the latter instead of the former for our winter birds field trip this weekend (2/18).

Target birds for this trip to the Snowy Range will be White-winged Crossbills, Red Crossbills, Pine Grosbeaks, Gray Jays, Clark's Nutcrackers, all of which have been seen in the area in the last week.

We will meet at 8 am at Coal Creek Coffee to carpool. Bring binoculars and field guides. Dress for the weather and bring water and snacks. If you can only join us for a short time, be prepared to drive your own vehicle or coordinate with carpool buddies.

Birders of all levels are welcome! Our trips are free and open to the public.
Posted by Cody at 11:44 PM No comments:

Next Wednesday, February 22, Libby Megna will give an informal talk on common songbirds of Albany County, and how to identify them by sight and sound. We will especially pay attention to easily misidentified species. This talk should be very helpful for beginning birders, and hopefully the experienced folks can learn some new things too. February is too early for most birdsong in Wyoming, but start practicing now to be ready for spring migration!

We will meet in the Berry Center auditorium. Parking adjacent to the building is free after 5 pm. Bird chat and refreshments begin at 6:30 pm, and the talk will begin at 7:00 pm.

Posted by Libby Megna at 9:00 AM No comments:

Join us this Saturday, February 18, for a winter bird walk  Vedauwoo Glen Road in the Laramie Range (see map for meeting place) LOCATION CHANGED TO SNOWY RANGE. Last year, the highlights were some early Mountain Bluebirds, a family of Red Crossbills actively feeding young, a wandering flock of Common Redpolls, and a group of noisy Pygmy Nuthatches. We will also keep our eyes peeled for Northern Pygmy-Owl, which was found in the Laramie Range for the first time last year.

This trip will coincide with the Great Backyard Bird Count, a citizen science initiative to gather data on numbers of birds during the Presidents' Day weekend. We will count the birds we see and submit the data to eBird. If you can't join us for this trip, I encourage you to count birds in your backyard--or anywhere else!--during 17 - 20 February.

We will meet at 8 am at Coal Creek Coffee to carpool. Bring binoculars and field guides. Dress for the weather and bring water and snacks. If you can only join us for a short time, be prepared to drive your own vehicle or coordinate with carpool buddies.

Birders of all levels are welcome! Our trips are free and open to the public. 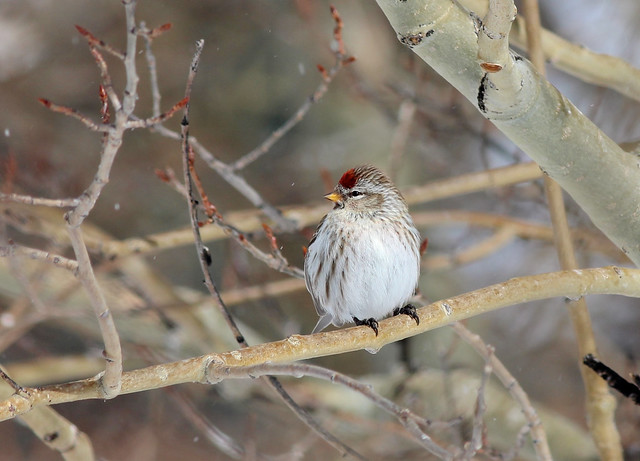 Posted by Libby Megna at 8:00 AM No comments:

On Saturday the 4th of February four people joined Dr. Gary Beauvais, Director of the University of Wyoming’s Natural Diversity Database, for what has long become an annual Laramie Audubon winter outing. We once again joined Gary to learn about identifying animal tracks left in the snow. The lessons learned over the years have been expanded to include other winter animal behavior and effects of forest session on various animal and plant species.

This year a light snow fall and wind combined to erase much of the evidence of animal movement. We were able to discover coyote/fox, pine squirrel, weasel, and moose tracks while also learning how domestic dog prints can easily be discerned from other canid tracks. The family dogs rarely practice the perfect step of their wild cousins. This occurs when the snow deepens and to conserve energy animals place their hind feet into the same location they stepped with their front feet.

Bird sightings in the deep forest was slightly better than most years with 3 stellar jays, 2 crows, 2 gray jays, and more than 20 mountain chickadees being observed.

Posted by Libby Megna at 8:18 AM No comments: