Join us Sunday afternoon, May 22, at 3 p.m. to learn more about Burrowing Owls.  Andrea Orabona, Nongame Bird Biologist from the Wyoming Game and Fish Department's Lander office, will describe an ongoing study radio tracking Wyoming's Burrowing Owl migration and wintering areas.  Andrea collaborates with Courtney Conway (University of Idaho) and other research partners in the U.S., Canada, and Mexico.  The burrowing owl is a Species of Greatest Conservation Need in Wyoming.  Andrea will discuss the need for this project, its objective, methods, and results.  Masks are encouraged at this event. 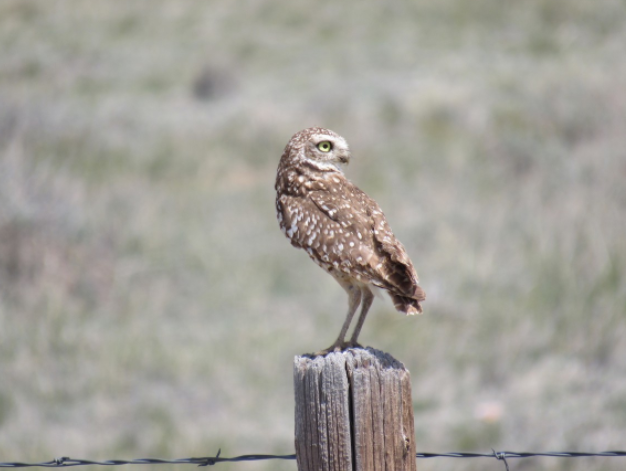 Location:  Berry Biodiversity Conservation Center auditorium (Room 138).  This building is located on the University of Wyoming campus at 10th and Lewis Streets. Due to ongoing construction in the area, there is no longer a parking lot across the street from the building - parking is available on surrounding streets.

Posted by Kathy Rittle at 2:04 PM No comments:

Join us early Saturday morning (June 4th) as we wander through the riparian and forested habitats near the Happy Jack sledding hill listening to the dawn chorus of singing birds.  This trip will focus on identifying breeding species by the songs they use to defend territories and attract mates.  Last year's trip covered appoximately 1.5 miles on a gravel road.  However, the group may elect to walk on the area's trails (with some small hills and uneven footing) depending on attendee interests and needs.  We will meet at 5:30 a.m. in the Happy Jack trailhead parking lot.

Directions:  From Laramie, take Interstate 80 east 9.5 miles to WY 210 (Exit 323).  Go left at the stop sign at the top of the exit ramp, left at the inersection with WY 210/Happy Jack Road, and then proceed approximately one mile to the Happy Jack Recreation Area sign on the right.  Travel down the gravel road to the parking lot on the right at the bottom of the hill.

Posted by Kathy Rittle at 1:58 PM No comments:

Saturday morning we will meet at 8 a.m. at the Wyoming Hereford Ranch headquarters in Cheyenne (directions below).  Based on recent eBird reports, the one-hour drive from Laramie is likely to be worthwhile!  Recent sightings include a Black-throated Gray Warbler, American and Lesser Goldfinches, Blue-gray Gnatcatcher, a variety of sparrows and towhees!  Depending on the interests of participants, we will either spend all of our time at the Ranch headquarters area or leave time to visit one of the nearby reservoirs.

Note that we'll meet at the ranch at 8 a.m., which means participants should plan to depart Laramie around 7 a.m. The forecast for Saturday in Cheyenne looks balmy, so remember to bring water and sun protection in addition to the standard warm clothes, sturdy shoes, and birding supplies.

Directions: From I-80, take Exit 367 (Campstool Road) and travel south approximately 1 mile to the entrance, which will be on the left.  Follow the driveway for approximately 0.25 miles and park opposite the red barn.

Posted by Kathy Rittle at 2:09 PM No comments:

We will meet Saturday morning at 8 a.m. at Greenhill Cemetery, outside of the cemetery office near the corner of Lewis and 15th Streets.  Please park outside of the cemetery - I recommend on-street parking either north of the entrance along 15th Street or west of the entrance on Lewis Street.  Or just ride your bike, as all destinations will be within the City limits.

Depending on the interests of the group and the luck that we have finding a diversity of birds, we may visit several locations: Greenhill Cemetery (flat paved and flat dirt roads), LaBonte Park (flat paved pathway), and/or the Greenbelt (flat paved pathway).
Remember to bring warm clothes, sun protection, snacks, water, and your birding supplies!  We hope to have a spotting scope along on this trip, which will be particularly useful for viewing the waterfowl in LaBonte Pond.
If you are looking for other in-town options when birding on your own, we recommend Spring Creek Pond (dirt trail at the east end of Spring Creek Drive) and Upper City Springs (fenced area visible from dirt roads at north end of Boulder Drive).
Posted by Kathy Rittle at 11:26 AM No comments:

Saturday's field trip (3/26; 8 a.m.) will meet downtown at First Street Plaza (corner of 1st St. & Grand Avenue, next to Coal Creek Coffee)  --  this location is different than that originally posted on our Events page.  Apologies for any confusion!  Other information regarding this trip remains the same: we'll caravan to the Plains Lakes, hoping for a variety of ducks, other waterfowl, gulls, and raptors.

The Spring 2022 schedule for Laramie Audubon Society field trips and programs has been announced!  Please see our "Events" page for details:  http://laramieaudubon.blogspot.com/p/events.html

Trip Report – Animal Winter Ecology and Tracks in the Snow

For the 22nd year Dr. Gary Beauvais, University of Wyoming Director of the Wyoming Natural Diversity Database has lead an outing, taking people associated with Laramie Audubon into the forest to search for animal tracks on the snow.  This year’s outing began at the intersection of State Highway 130 and Sand Lake road where Gary was joined by eleven.

When finding individual prints and track lines Dr. Beauvais described how a person can identify numerous attributes of the species creating the impression(s). One can tell how the animal moves across the environment whether it walks or hops, does it drag its tail, and does it spend most of its time above the snow or does it spend only a short duration above ground while spending much of the winter in the subniviean zone between the bottom of the snow and ground surface.  The tracks can also detail the length and width of the animal making the track. Viewing individual prints can show the direction of travel and its type of foot, did the an
imal have hooves, toes, claws.  The winter landscape can also show feeding habits of some animals. Without leaves one can see the snipped off tips of willow branches by feeding moose or the discarded remains of pine/fir cones from a snow buried cone midden (pine squirrel).

Posted by Kathy Rittle at 10:07 AM No comments:

Dr. Gary Beauvais, Director of the Wyoming Natural Diversity Database, will lead a snowshoe/cross-country ski trek through forest and riparian areas of the Medicine Bow National Forest on Saturday, January 29.  The focus of this trip, which is sponsored by the Laramie Audubon Society, will be learning how to identify winter animal tracks and unravel signs written into the winter snow. The group will also discuss existing knowledge regarding the natural history of the winter environment.  Attendees must provide their own equipment and be prepared for cold winter conditions.  Please dress in layers and bring plenty of snacks, water, and sun protection.

The group will meet at 8:30 a.m. at the intersection of Highway 130 and Sand Lake Road, approximately 4 miles west of Centennial.  Parking will be in the cleared area at this intersection.  Attendees will return to Laramie by approximately 1 p.m.; those with their own transportation are free to leave at any time.  The backup date in case of bad weather is Saturday, February 5. 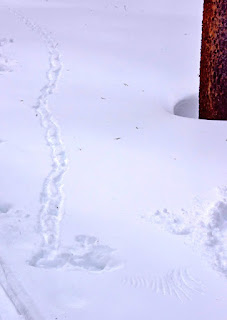 The Laramie Audubon Society will again take part in a 100+year-old tradition: the annual "Christmas Bird Count."  Volunteers are welcome to join in the count with the LAS chapter as it conducts the Albany County CBC on Saturday, December 18. This will be the 44th count of the Albany County circle and the 122nd national event.  Volunteers are needed to help count every bird present in the 15-mile diameter circle around Laramie on the day of the count. All types of bird watchers, including feeder watchers, are welcome.

The Albany County CBC will again be modified to provide for social distancing. All volunteers for the Albany County circle must pre-register or attend one of two drop-in Zoom calls to receive a route assignment. There will be no in-person meetings prior to the count. Contact Shay Howlin (286-1972*; wolfhowlin@gmail.com) for information and to register.

Volunteers are the backbone of the Christmas Bird Count and are encouraged to participate despite continued changes to the format this year due to public health (Covid-19) considerations. As usual, some teams will walk, while others will drive through their territory.  Per national Audubon CBC rules, masks will be required when social distancing is not possible in the field.  In addition, we will not facilitate carpools, in order to limit carpools to existing familial or social pod groups.  If you will be traveling over the holidays and would like to participate in the CBC in the region that you are visiting, look for event dates and locations here: https://www.audubon.org/conservation/join-christmas-bird-count.

Virtual compiling will take place at 6 pm on the day of the count. Electronic submission of data forms will be encouraged to facilitate the compiling event. Please contact Shay if you would like to be assigned a route early, would like forms for feeder watching, or have any questions.

We hope to be able to resume the traditional event format (complete with Shay's famous chili supper) next year!  (*Area code 307)

Posted by Kathy Rittle at 10:44 AM No comments:

We are extending the Fall deadline for our small grants program.  Applications will be accepted through November 20th.  See the "Grants" page for program details!  (http://laramieaudubon.blogspot.com/p/small-grants-program.html) 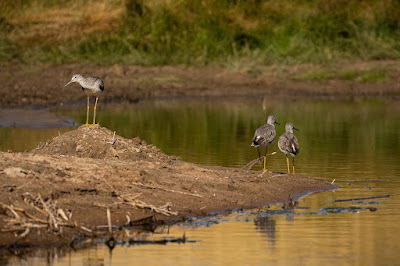 Posted by Kathy Rittle at 8:04 PM No comments:

At 8 a.m. on Saturday morning (November 6th) we will meet in the parking lot on the west side of the West Laramie Fly Store (1657 Snowy Range Road) and then caravan to various lakes in the Laramie Valley, potentially including Blakes Pond, Meeboer, Gelatt, Twin Buttes Reservoir, and/or Lake Hattie.  From eBird reports, it looks like large flocks of Redheads and many other migrants are now arriving at Lake Hattie.

This trip will involve minimal walking, as we will probably observe from the parking areas at each stop.  We plan to be home by noon, but everyone is free to leave earlier (or extend their trip).  Although Saturday's weather looks promising, please remember to bring plenty of warm clothes, because it may be cold in the morning and there will be no protection from the wind.  We also suggest bringing your birding supplies (binoculars, bird books, etc.) as well as sun protection, snacks, water, and a friend.

Posted by Kathy Rittle at 9:53 AM No comments:

Clear blue skies and warm sunshine accented the reds and golds of fall during the October 2 LAS trip to Hutton Lake National Wildlife Refuge.  The surprising lack of the usual Wyoming wind was much appreciated by the small group of birders who gathered to enjoy the morning.  The stillness allowed everyone to hear sounds that might have been missed on a gustier occasion:  the subtle song practice of immature White-crowned Sparrows, the distant yipping of several coyotes, and the feathery wingbeats of a flock of Ravens flying just overhead.  Horned Larks, the most numerous bird of the morning, announced their identities with their sweet, light calls.  Our outing began and ended with the burbling of a chatty Marsh Wren, who was making good use of the rushes and shrubs despite the lack of water in much of the refuge. 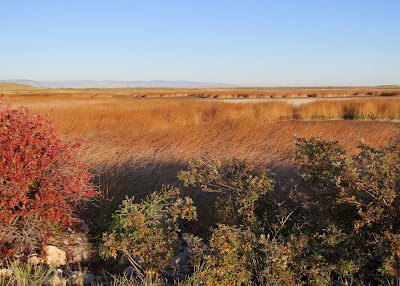