The White-tailed Ptarmigan has the most southerly distribution of any of the ptarmigan in North America (Rock Ptarmigan gets at least as far south in Japan), with their native range reaching as far south as the mountains of northern New Mexico.  Found in alpine habitats at or above treeline, White-tailed Ptarmigan can be found in areas with stunted willows, sedge meadows, and other alpine habtiats (Braun et al. 1993)  They are widely distributed across alpine tundra habitat in Colorado, and are also found in southwestern Montana and the Cascades of Washington.  Ptarmigan have also been introduced into mountains in northern Utah, the Sierra Nevada in California, and the Wallowa Mountains in Oregon.  However, despite this extensive range throughout the Rocky Mountains, White-tailed Ptarmigan are strangely absent from Wyoming.  A range map shows a large gap in their distribution in Wyoming.  Why is this the case?  Have they always been absent?

A bit of research into the history of this species reveals that White-tailed Ptarmigan used to be found in the Snowy Range, just outside of Laramie.  Regular reports of the species go back as far as the mid-1970's, with a single documented record from 2005 which may represent a dispersal event from Colorado (Hoffman 2006, Faulkner 2010, Cornell Lab of Ornithology 2012).  Anecdotal sight evidence from the Wind River Range and the Bighorns have been presented from the 1930's, but this is unverified, and subsequent searches of these areas have found no evidence of ptarmigan anywhere else in the state, despite extensive suitable habitat (Hoffman 2006). 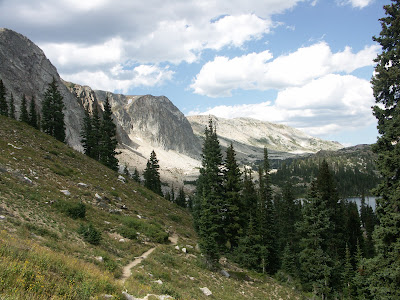 So, if White-tailed Ptarmigan were in the Snowy Range as recently as the mid-1970's, why are they no longer there?  A report prepared by Hoffman (2006) for the USDA Forest Service suggests several reasons for their absence.  First, the available habitat is very limited, and may be unable to support a sustainable population.  While there may be immigration from Colorado occasionally (as the 2005 record suggests), they are unlikely to persist.  Second, the area has high recreational usage, both from extensive snowmobiling in the winter, and hiking in the summer, which may degrade habitat.  Finally, the alpine tundra habitat was extesnsively grazed by sheep until 1997, which may have also degraded the habitat to a point that it is unable to sustain a population of ptarmigan (Hoffman 2006). 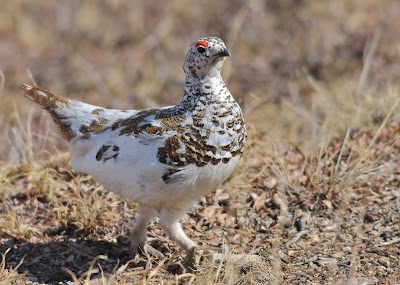 Despite there being sustainable populations of ptarmigan only 50 kilometers from the Snowy Range, and less than 10 kilometers from the Wyoming border, it is unlikely that White-tailed Ptarmigan will again have a sustained population in southeast Wyoming due to continued habitat degradation.  Why ptarmigan have never been conclusively found in the other Wyoming ranges, however, remains a mystery.  Until we learn more, we will have to be content with hopping across to Colorado and enjoying this spectacular grouse there.

It’s time to start planning for this year’s nightjar surveys! Our nightjar surveys must be conducted between June 16th and June 30th. For those of you who are unfamiliar with this effort, the Laramie Audubon Society is a yearly participant in a National Nightjar Survey that was initiated in 2007 by the Center for Conservation Biology.

Nightjars are enigmatic, nocturnally-active birds whose populations are thought to be declining throughout North America. Wyoming has two species of nightjars: Common Nighthawk and Common Poorwill. In 2009, Laramie Audubon adopted five survey routes in the vicinity of Laramie (Sybille Canyon, Buford, Harmony, Fox Park, and Rock River). We will be surveying these same routes in 2013 during the established survey period.

The night surveys are fairly easy and really enjoyable. It’s great to be able to spend a few hours collecting data for an important national bird conservation effort. Surveys take no more than two hours and consist of making 10 stops along an established route. At each stop, we count the number of nightjars heard during a 6-minute period and fill out our observations on a data sheet. It is important to have good hearing to conduct these surveys. Surveys have to take place on a relatively clear night when the moon is more than 50 percent full and when there is not too much wind (these requirements can be challenging for the Laramie area!). Surveys begin at least 30 minutes after sunset and must be completed after moonrise and before moonset.  You can do the surveys alone, but it’s easier to work in teams.

If you are interested in participating in these surveys please e-mail me to let me know at sophie_osborn@hotmail.com. For those who would like to participate, I will explain the protocols and data collection, and hand out data sheets, sunset/moonrise/moonset times, and survey route maps on Tuesday June 11 at 6 pm and Wednesday June 12 at 6 pm in the Student Union – at the seating area across from the coffee shop on the main level. Hopefully anybody who is interested will be able to make one of those dates. If not, you can call me at 307-742-6138 to set up an alternate time to meet with me.

Thanks to those who decide to participate and let’s hope the weather cooperates this year!

P.S. For those who prefer hiking and doing daytime bird surveys, we will be conducting our annual Brown-capped Rosy-Finch survey on July 20, 2012 this year. More information about that survey to come soon...
Posted by Julie Hart at 6:58 PM No comments:

On Saturday, June 1st, 14 people showed up to bird around Hutton Lake and on down to the Colorado border at Chimney Rock. It was a decent day of birding, despite not finding any active raptor nests along the ridge on the way to Chimney Rock. An unexpected bird for some was a Veery, heard at two stops adjacent to wetlands. The four checklists from the day are below.

One of the many uses of birds to humans is that they are pollinators and seed distributors. A recent article in Science magazine documented a decline in the size of palm tree seeds due to the decline of large-billed birds.

"As toucans and other large-beaked birds have vanished from Brazilian forests, the seeds of palm trees have shrunk, scientists report." Read more here.

At the end of April, a birder in Montana found a Baikal Teal hanging out with some Wood Ducks near Missoula. This bird is named after where it is usually found this time of year--Lake Baikal in Russia. For some great photos by the person that found the bird, check out his webpage here.

You never know what you might find out there!
Posted by Julie Hart at 9:18 PM No comments: