When managers try to move a species to a new environment, many of the animals often die soon after being released. Now scientists have found one possible reason for the high failure rate. According to a study in Biology Letters, birds don’t get enough sleep when they’re in an unfamiliar place.

Read the rest of the commentary from Conservation Magazine here.
Posted by Julie Hart at 8:19 AM No comments:

Breeding Birds of the Laramie Plains

By mid-July here in Laramie, breeding season is well under way, and for some species, already over.  While early summer can be a slow birding time in many parts of the country, things are still quite interesting and exciting here in Albany County.

Out on the plains around Laramie, many songbirds are busy feeding nestlings and fledglings.  I recently took a trip up to the Old Laramie River Road, which runs through a variety of grassland types, from the typical dry shortgrass prairie to wetter, longer grass habitats closer to the Laramie River.  This variety of grassland habitats means that this area has some of the best diversity of grassland species in Albany County, including both longspurs, Lark Buntings, and Vesper Sparrows, among many others.

Many species, including Horned Larks (Eremophila alpestris), and McCown's Longspurs (Rhyncophanes mccownii) have fledged young, and already seem to be flocking in preparation for their southward migration toward the end of August. 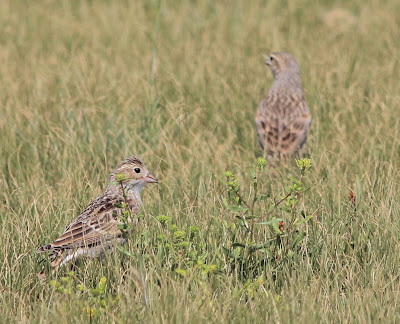 In addition to McCown's Longspurs, Old Laramie River Road is probably the best spot in Albany County to see Chestnut-collared Longspur (Calcarius ornatus).  In wetter, longer grass, this species is quite easy to find as they sing from any elevated perch.  Like McCowns, Chestnut-collared Longspurs also skylark, singing in flight, although their skylarking display is not as impressive as that of McCown's Longspur. 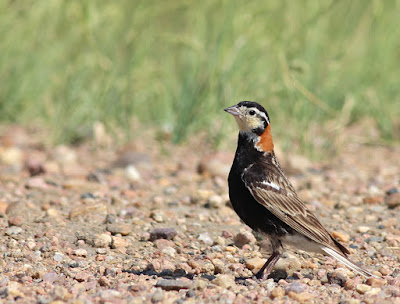 In addition to the great songbird activity, Old Laramie River Road has also had an exciting diversity of raptors, with many fledgling Swainson's Hawks foraging across the plains.  There have also been Red-tailed and Ferruginous Hawks, American Kestrels, and Prairie Falcons.

Despite the heat of the summer, there is still quite a bit of bird activity out there, so get out there and see what you can find.  This is a really interesting time of year, and you never know what might show up.

Note: all photos in this post are © Shawn Billerman
Posted by Shawn at 9:00 AM 2 comments:

Please join us for a day of hiking and bird surveying in the beautiful Snowy Mountains! We will be conducting the Laramie Audubon Society’s annual Brown-capped Rosy-Finch survey in the Snowy Range on July 20, 2013this year.

In 2003, Audubon Wyoming designated a site within the Snowy Range as one of Wyoming’s Important Birds Areas because its alpine habitat supports Wyoming’s only breeding population of the Brown-capped Rosy-Finch. This bird is a species of concern because it breeds only in the Snowies and on mountain peaks in Colorado and northern New Mexico. If the current global warming trend continues, its mountain habitat islands are likely to shrink and to be invaded by other avian species that are currently excluded by the harsh conditions. Documenting how many Brown-capped Rosy-Finches are in the area and where they are feeding and nesting can help us to monitor this population and determine how the birds are faring.

This year, the Wyoming Natural Diversity Database has teamed up with Laramie Audubon to develop additional survey routes so we can get a more accurate picture of where rosy-finches occur and are nesting in the Snowies. We also will be attempting to make our data collection slightly more rigorous by using GPS units to mark our observation points and our nest locations. If you have a GPS and are willing to use it, please bring it along on the survey.

Please let Sophie know if you will be joining us on the survey and if you plan to bring your own GPS unit at 307-742-6138 or at sophie_osborn@hotmail.com.

We will meet on July 20, 2013 at 8:30am at the Forest Service Visitor Center, on WY 130, approximately 1-2 miles west of Centennial WY. After a brief orientation session, we will divide the group into teams and will divide up the survey routes.

What to expect: Be prepared to spend the day hiking and looking for rosy-finches. The birds are not in predictable locations so considerable walking may be required. Some of the trails have fairly steep portions and the elevation can be challenging for some people. You may also spend time sitting in certain areas to search for or observe birds. Most survey routes are along established trails; a few of the new routes will be off-trail.

What to look for: In spring and summer, Brown-capped Rosy-Finches often feed at the edge of snowdrifts, where seeds that were blown onto the snowpack during winter emerge from the melting snow cover. Spring winds also blow insects from lower elevations that settle onto the snow where they can be found by birds that are gathering food for their nestlings. Nests are well hidden in talus and in shallow crevices in rock faces. When seen feeding on bright snow, rosy-finches may appear to be a solid dark color. In better light, their light-pink flanks and rumps are visible and they show a flash of pink in their wings when in flight. 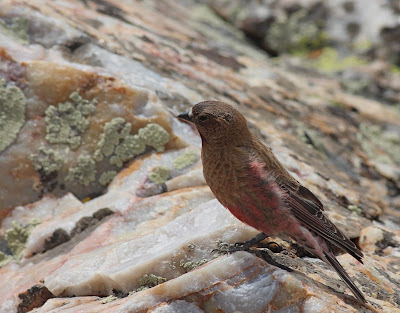 What to bring: Binoculars and/or spotting scope, a field guide, warm clothes (including wind protection), lunch and snacks, water, and sunblock. Please bring a GPS unit if you have one. We will provide route maps.

Note: all photos in this post are © Shawn Billerman
Posted by Shawn at 1:01 PM No comments:

I recently had a very lovely walk along the Brush Creek ski trail loop system which starts at the visitor center along W. C130 just west of the T intersection with Hwy C130 North. From Laramie take the C130 Centennial Snowy Range Scenic Byway all the way to the end where it bottoms out just east of  Brush Creek. (approx 1 hour)  It is a low damp area lined with spruce providing lots of cover for birds and wildlife. Clark's Nutcrackers were very common as they tamely flit just ahead of you, along with RC Kinglets. Also present were hermit thrush, chickadees, and a probable (plumbeous?) vireo. There were also quite a few butterflies including many checkered skippers, tiny blues, sulphurs, a cabbage and a mourning cloak. Also a sprinkling of some mostly white and yellow wildflowers along the wet path. All in all making for a very nice  nature hike and a good spot  for LAS  birders and butterfliers to explore. It took about 4 hours to casually hike the entire loop of about 10 miles of easy level terrain, damp and a bit muddy requiring boots. The intersections of the trail are well marked with signs and maps but bring a pocket compass to be sure of correct path to take.  Be aware of elk ( saw several) and possibly black bear. Have a real nice walk on this pretty and quiet trail.