For those of you who are unfamiliar with this effort, the Laramie Audubon Society participates in a National Nightjar Survey that was initiated in 2007 by the Center for Conservation Biology. Nightjars are enigmatic, nocturnally-active birds whose populations are thought to be declining throughout North America. Wyoming has two species of nightjars: Common Nighthawk and Common Poorwill.

In 2009, Laramie Audubon adopted five survey routes in the vicinity of Laramie and we have been surveying these routes once a year ever since. The night surveys are fairly easy and quite enjoyable. Surveys take no more than two hours and consist of making 10 stops along an established route. At each stop, we count the number of nightjars heard during a 6-minute period and fill out our observations on a data sheet. It is important to have good hearing to conduct these surveys. Surveys have to take place on a relatively clear night when the moon is more than 50 percent full and when there is not too much wind (these requirements can be challenging for the Laramie area!). Surveys begin at least 30 minutes after sunset and must be completed after moonrise and before moonset. You can do the surveys alone, but it’s easier to work in teams.

If you are interested in participating in these surveys please e-mail me. For those who would like to participate, I will explain the protocols and data collection, and hand out data sheets, sunset/moonrise/moonset times, and survey route maps on Tuesday June 3rd at 6 pm in the University of Wyoming Student Union, at the seating area across from the information booth on the main level. If you cannot make this training time but would like to participate, please e-mail to set up an alternate time to meet me.

Thanks to those who decide to participate and let’s hope the weather cooperates this year!

P.S. For those who prefer hiking and doing daytime bird surveys, we will be conducting our annual Brown-capped Rosy-Finch survey on July 12, 2014 this year. More information about that survey to come soon...
Posted by Libby Megna at 9:13 PM 1 comment: 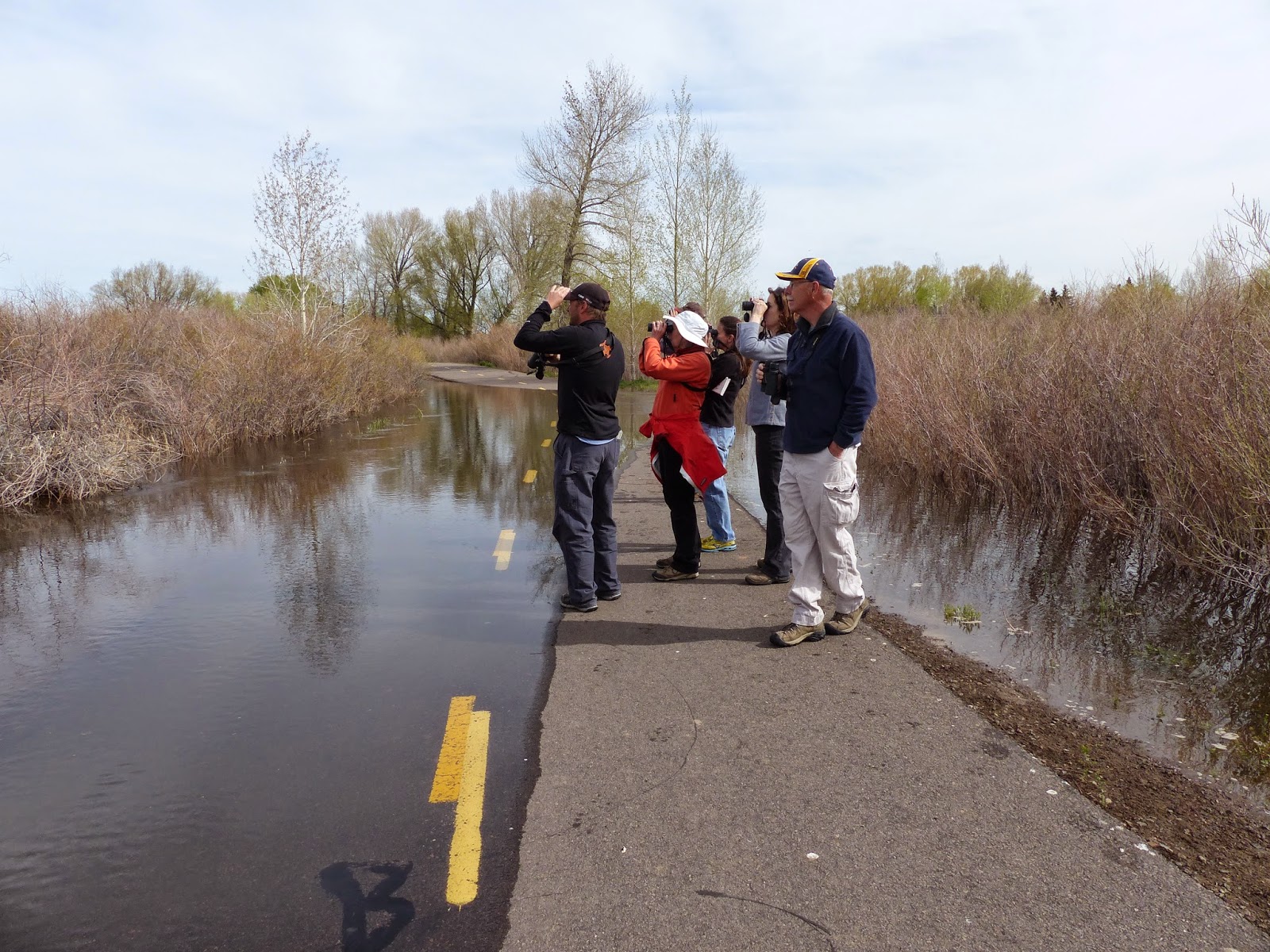 The weather for our trip today was great and despite a relatively slow morning bird-wise, we had
excellent views of colorful neotropical migrants and spent some quality time learning to identify birds by their songs. Highlights were a male Rose-breasted Grosbeak at Greenhill Cemetery, a singing Veery at Optimist Park, and dark-morph Swainson's Hawks at Optimist Park and Greenhill Cemetery. We detected a total of 44 species; links to the eBird checklists for each hotspot and the complete trip list are below. 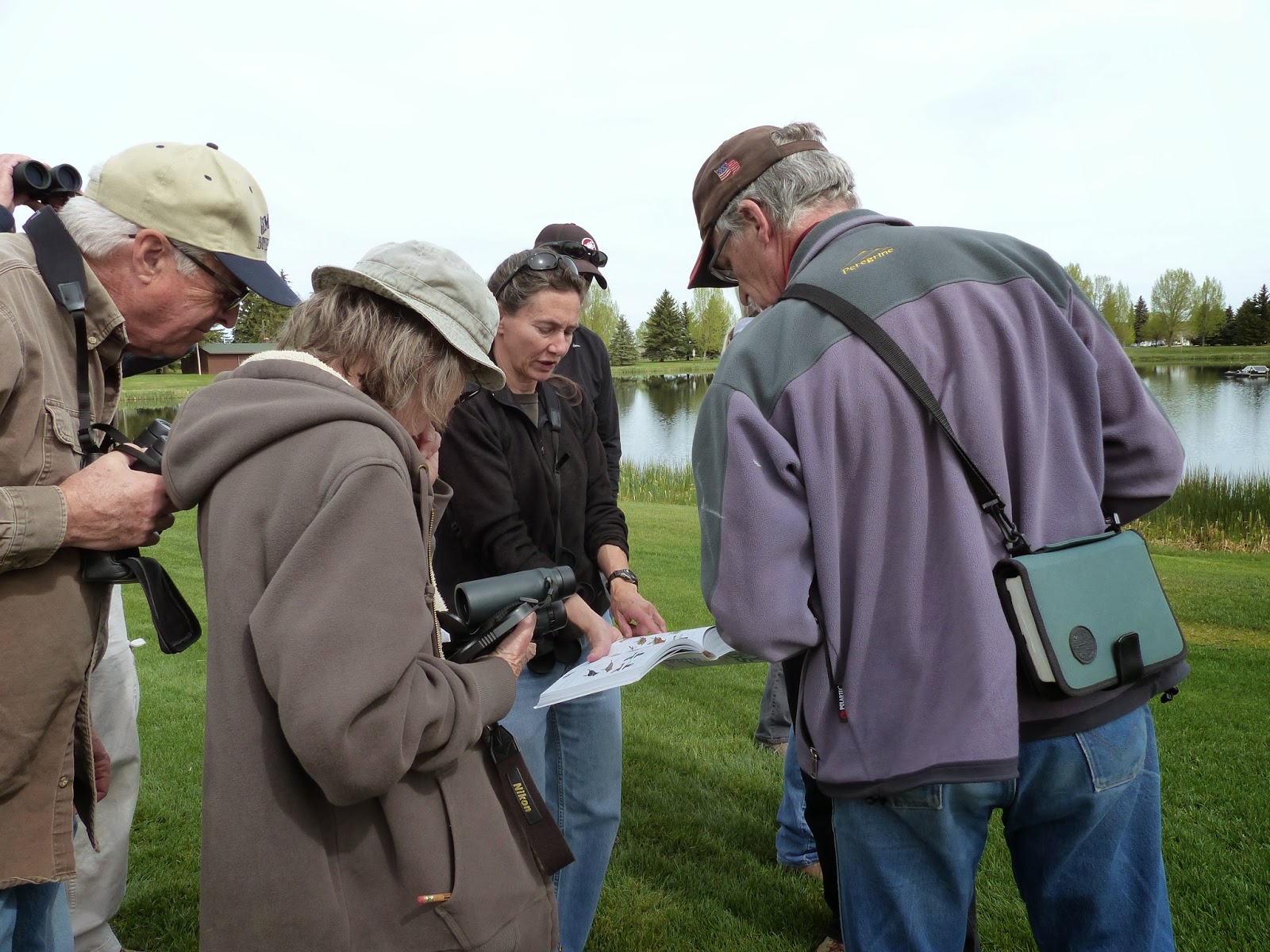 Join us next Wednesday, May 28th, for our last evening program of the spring season. Dr. Jackie Canterbury, co-author of Birds and Birding in Wyoming's Bighorn Mountains Region, will give a talk followed by a book signing. Her book was published last fall and contains the most up-to-date information on the distribution and breeding status of bird species found in the Bighorns. Birds and Birding also explains the Bighorns' ecology, geology, and birding locations.

The talk will be held at the Berry Center in conjunction with the University of Wyoming's Biodiversity Institute. The reception will begin at 6:30 pm and Dr. Canterbury's talk will begin at 7:00 pm. This event is open to the public.

Birds and Birding in Wyoming is available for purchase or free download here. 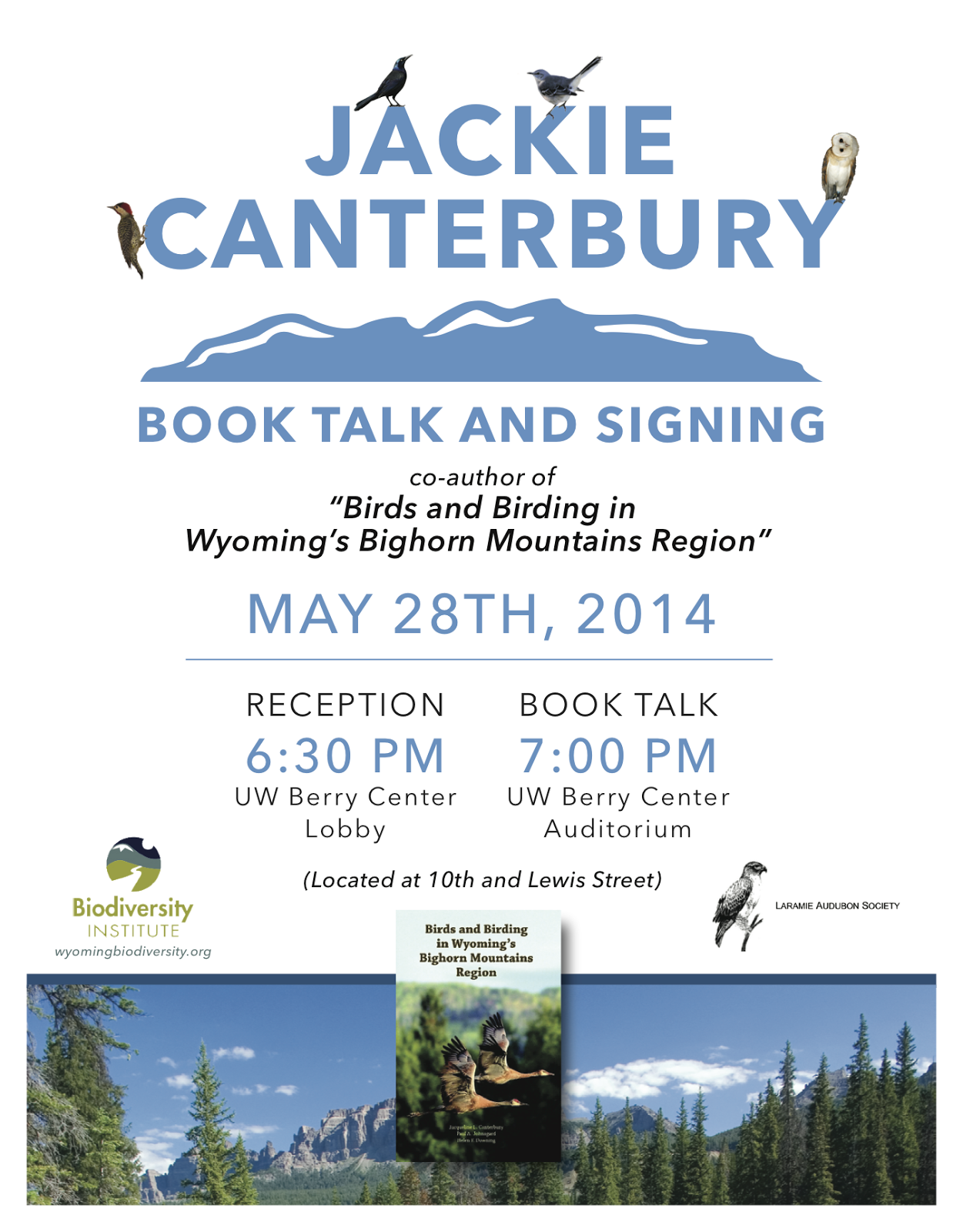 It’s not every day that you see an Eastern Screech Owl and a Red-headed Woodpecker, but the twelve participants on Laramie Audubon’s May 17, 2014 trip to the Hereford Ranch, near Cheyenne, were treated to spectacular views of both of these species as well as 54 others. The rain that was forecast held off, the sky cleared, and the birds cooperated. While we didn’t see any orioles, vireos, or quite the warbler diversity we expected, we all enjoyed the colors, songs, and avian activity that were on display at Hereford.

Greenbelt/LaBonte/Greenhill Tour of Laramie Hotspots, Saturday, May 24, 8:00 am

Join Laramie Audubon Society for a walk along the Laramie Greenbelt on Saturday, May 24, 2014. Meet at Coal Creek Coffee, downtown Laramie, at 8:00 am to caffeinate and carpool.  Many new summer residents and spring migrants can be found on the Greenbelt along the Laramie River.

After the Greenbelt, if time and stamina permits, we will head to LaBonte Park in Laramie, where the lake hosts migrating waterfowl and shorebirds.  Then it's off to the Greenhill Cemetery next to UW Campus where tall evergreens abound.


Sophie Osborn and Chad Olson will lead us to one of the best birding areas in southeastern Wyoming to view spring migrants. Here's a chance for you to see some birds that are more often associated with the eastern US.

Meet at 8:00am at Coal Creek Coffee, downtown Laramie, to caffeinate and carpool or
caravan. Be sure to gas up ahead of time. Our field trips last for several hours (plus driving time to and from Cheyenne) but you may leave any time if you have your own vehicle.

Photos courtesy of Cornell Lab website.
Posted by vickis at 9:21 AM No comments:

We had a great trip to Arapaho National Wildlife Refuge on May 3, 2014. Although traces of winter still lingered, we were treated to Willets displaying, a beautiful pair of adult Bald Eagles at their nest, a Marsh Wren nest-building, and incubating Double-crested Cormorants. We saw many returning migrants, including a good diversity of ducks and grebes, two Semipalmated Plovers, and four Black-crowned Night-Herons. The trip highlight may have been the 29 beautiful Marbled Godwits foraging along the shore of Walden Reservoir.

International Migratory Bird Day is an annual event to celebrate one of the greatest wonders on the planet -- bird migration! This year's theme is "Why birds matter". To learn more about the event and find related events, visit the IMBD website.

Calling All Birders for Wetlands Study

The Nature Conservancy of Wyoming and its partners are seeking birders to help with a wetlands study in Southeast Wyoming this summer. By submitting your sightings of birds at wetland sites in Goshen Hole and the Laramie Plains using eBird, you can help scientists with their study of wetlands.

Click here to see the press release from the Nature Conservancy for more information on how you can help with an important study of wetlands in Southeast Wyoming.


Note: All photos in this post are © Shawn Billerman
Posted by Shawn at 11:42 AM No comments:

This is an interesting story right up there with brood-parasitizing cowbirds (dumping their eggs in the nests of other birds) and kleptoparasitizing gulls (bullying other gulls so they can steal food from them). 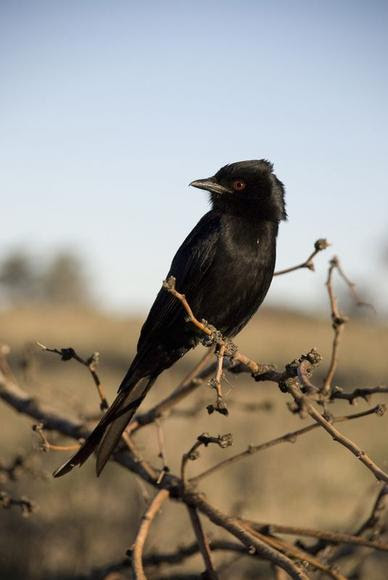