The eastern United States and Canada are in the midst of a massive Snowy Owl (Bubo scandiacus) invasion. Unlike the irruption a couple years ago, this event seems to be limited to the Atlantic Coast and Great Lakes region, with large numbers of owls showing up as far west as Minnesota, Illinois, and North Dakota. Snowy Owls are even showing up as far south as North and South Carolina, with one report even coming from Bermuda!  Despite the restricted range of this winter's irruption, incredible numbers of birds are showing up.  One particularly impressive report comes from Bruce Mactavish in Newfoundland, where over 300 Snowy Owls were found in a small area of coastline (you can read more about this here).

This Snowy Owl invasion has caught the attention of many people, with articles even appearing in the New York Times, which you can see here.  Another extremely informative and interesting article about the impressive Snowy Owl flight is on the eBird homepage.  In this article, you can see the extent of this year's Snowy Owl distribution compared with last winter, which was not an invasion year.  The maps are striking.

I was lucky enough to see some of the Snowy Owl excitement on a recent trip home to New York for the holidays.  The first bird we encountered in the early morning light was still actively hunting from atop a power pole right next to the road. We were able to watch the bird from a respectable distance without disturbing it while it actively searched the dunes for prey before eventually taking flight to roost for the day. 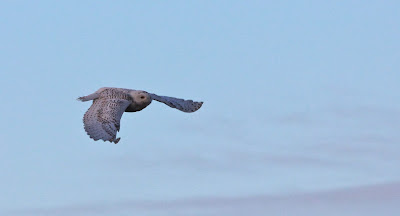 The second bird picture below was encountered roosting in the dunes along the beach.  This was one of two birds we saw at this site. Many of these coastal sites throughout the Northeast are currently harboring one or more Snowy Owls, where they haven been observed preying on mice, rats, rabbits, and even birds such as pigeons and ducks (Parmelee 1992).


Note: all photos in this post are © Shawn Billerman